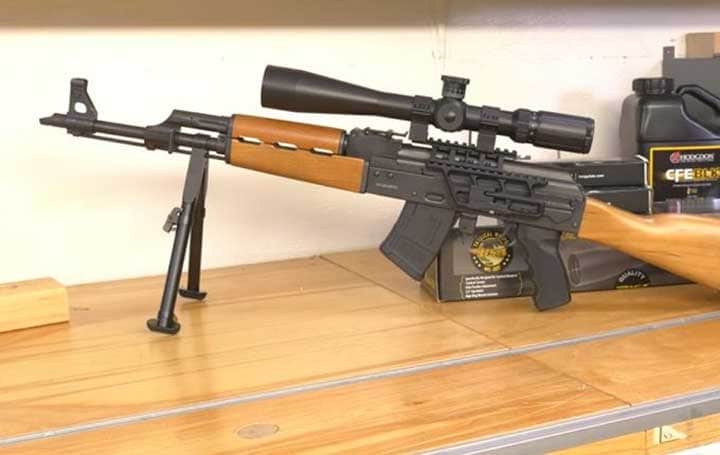 The AK-47 is the most prolific a small army ever to be created. Using conflicts on every continent, except Antarctica, this rifle represents warfare in the modern age. A short light carbine capable of firing rapidly with low recoil and good accuracy.

These guns were necessarily designed to have scopes and there are a few problems you run into when trying to shoehorn an optic on to these rifles. That doesn’t mean it can’t be done, quite the opposite there are several scopes that stand out as really great companions to an AK-47 and increase your effectiveness by simplifying the aiming process and extending your range with your rifle.

If you are so inclined to start the project of ​getting your rifle outfitted with a scope, here are the five best scope for AK-47.

The first thing you need to understand when you go about buying a rifle for an AK-47 is that these rifles were designed before the advent of soldiers having access to optics. Much like the original M-16s, these rifles don’t have a good way to mount a scope on them, any way you mount the scope of these rifles is going to be a compromise in either performance or usability.

There are essentially three ways to mount an optic, and one is not necessarily better than the other. The first is to get a quadrille hand guard and run a scout optic set up on your rifle. The second is to have a gunsmith weld a rail to the top of the dust cover that fits over the receiver. This will allow you to use an optic in a traditional way but will require you to reserve your rifle each and every time you clean it.

The final solution and one that Russia uses today are to have an offset mount welded to the side of the gun. This cantilevers and optic over the top of the receiver and allows you to remove the dust cover and clean the gun while using a traditional scope set up and not having to constantly read your rifle. They are effective but they add bulk and weight to the gun, think about which solution is best for you before you make a decision on the type of scope you like to buy.

Best Scope for AK 47 on the Market Review 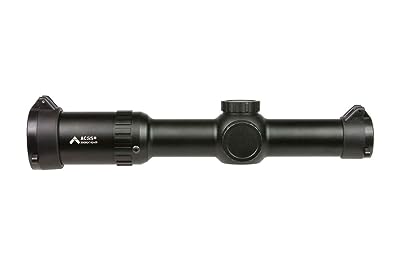 Primary arms have only been in the optics games for a little while, but they are being well-received by shooters and hunters the world over for putting out inexpensive, decent quality optics that perform well in the field.

The nice thing about their optics if they don’t leave anything out for the sake of price. This is an excellent example where they taking a classic 1-6x power magnification design and added a ton of features to make it perform better.

The improvements they’ve added mainly go towards making the scope faster and easier to use. Refinements like a BDC reticle, reticle illumination, and the inclusion of skullcaps make this scope suitable for a lightweight carbine like an AK-47 that will be put through some abuse while you use it.

The BDC reticle included in the scope looks much like a Trijicon ACOG and while the design for the 300 block a cartridge it is close enough to the 7.62x39 cartridge, you can use it without hesitation or worry. The illumination built into this scope has 12 brightness settings that you can dial up and down the red Chevron depending on how dark it is outside so that you don’t get blinded by your reticle.

Everything about this scope makes it a great choice for the AK-47 but especially the light weight and compact nature of the scope that allows you to be mounted low to the bore axis and out of the way while carrying your rifle around. 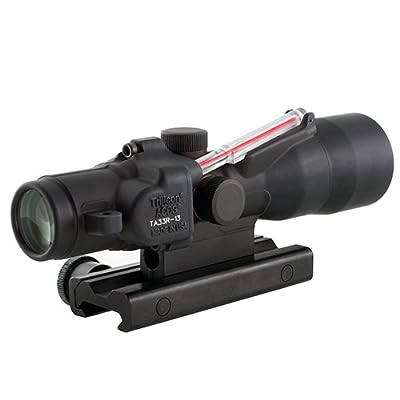 This is one of their bread and butter scopes. It is an ACOG, designed for .300 block out, that is a fixed power scope at 3x power with a 30mm objective bell. Despite being so simple, the sheer amount of ruggedness and armor this scope has makes it heavy and expensive.

The ACOG has two groups of people, its fans, and his haters. Many people either absolutely love the scope or absolutely hate it. Get your hands on one before you buy, and see if you like it or not, the people who like it will never apart from it, mainly because they’ll never need to replace it!

If you saw a rifle that came packaged from the factory with the scope in the past two years, it was probably a vortex scope. Some of the largest manufacturers and business, like Ruger and Remington, have included this scope on the rifles for one very good reason. It may be the most cost-effective scope for general shooting and hunting on the market today.

Vortex is one of the most innovative and forward thinking companies in the optics industry. All their products are designed by people who climb shoot and use the products that they produce and you can tell once you get their scopes in the field.

This is one of their most popular scopes because it combines some refinements on the classic style scopes, by adding durability and quality while shrinking the overall size and weight of the scope.

Everything that should be on an optic is there, fully multi coated lenses, O-ring sealed dry nitrogen purged body, a fast focus eyepiece, a slim and trim construction, and one of the best warranties in the business. The benefit of this scope is that it brings all of these features while being cheaper and smaller than many other scopes out there, perfect for a light and fast carbine like an AK-47. 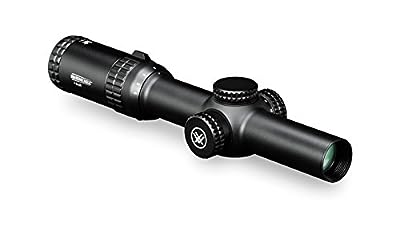 Vortex purpose made this scope for the AR 15. They constructed the design around the idea of a lightweight carbine that is going to be used in close quarters and fast situations like hunting or three gun matches. Many of the same situations and the AK-47 shooter will find themselves in. That is why despite being made for the guns rival, this is an excellent scope for an AK-47.

Vortex put just as much armor and ruggedness and it is scope as the others, and included all the features that should be there but went the extra mile when it came to including amenities for infield use. First off, this scope is as slim and trim as it gets. The 30mm tube has a 24-mm objective bell, the adjustment turrets are as low-profile as possible, and the fast focus eyepiece is a short and thin as it gets.

This case the optic from being mounted too high above the bore or getting in the way when you are trying to shoot or carried a rifle around. Extremely important for AK-47s and getting around the quirkiness of mounting a scope to one.

The second focal plane reticle is glass asked for maximum durability and reliability and is illuminated in the scope with several different brightness adjustments. It works well with AK-47s and provides a reference point for fast holdovers and snapshots. This scope is expensive, but if you have the budget and decide to pull the trigger on it, you won’t be disappointed. 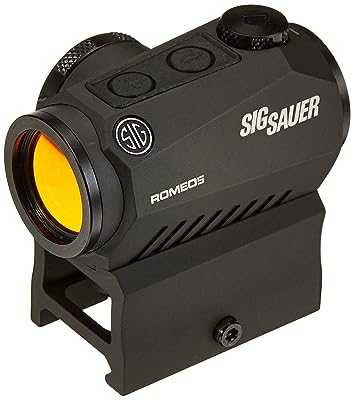 Sig Sauer are known as making some of the best pistols on the planet. Recently they’ve gone in the optics market and commission companies to build interesting products that are beginning to become the industry standard for innovation and design.

This is their foray into the micro red dot segment of the market it is quickly becoming one of the most loved products out there. Mostly because it is cheaper than some of the industry giants that put out equipment that is become the gold standard and was adopted by the military, but also because this optic has a special feature that no other red dot currently has.

You can leave this optic on constantly, but when the optic doesn’t detect any movement it will turn off to conserve battery life. As soon as you move the rifle that this optic is attached to, the red dot turns on automatically to provide you with an aiming reference.

This is huge because this technology is cheaper than the technology that goes into products like Aimpoints, that gives them such a long battery life. The only downside to this unit is that it uses an odd coin cell battery that is only found reliably online.

The optic itself is incredibly rugged, lightweight and compact. You won’t even notice on your rifle until you go to shoot with it! Just make sure you buy batteries and stock up when you purchase the scope.

Keeping Zero With Your Scope

Adam has been stated, the AK-47 was not designed with optics in mind. There’s no really good way to shoehorn a scope on to the gun. You’ll always have to make a compromise when you try to add newer technology on these old-world rifles.

That means that you need to be aware that if you mount a scope to the dust cover of your rifle or to the hand guard, and then you remove that hand guard or dust cover you will lose zero and need to take your rifle back to the range before you compete or hunt with it.

A few manufacturers have come out with designs that claim you won’t lose zero when you remove your optic from the gun and remounted. That is true if and only if the service that the mount is mated to doesn’t move.

It could be off by several inches at 100 yards in a worst-case scenario, be on the lookout for this and always re-zero your rifle after you remove any of the components.

The AK-47 can be hard to mount a scope on two. But that doesn’t mean you should be discouraged, find a scope that you like and choose a mounting solution that works best for it, get your hands on a few boxes of ammo and get to the range. The AK-47 is not a safe queen, and the best scope for AK 47 in the world won’t do you any good if you never use it!

Mckinley is an avid shooter & firearms instructor. He shoots, hunts and loves to spend time at the range. He has worked with and around firearms for several years and enjoys talking to anyone interested in learning more about firearms & their 2nd Amendment rights.

OpticsAddict.com is a participant in the Amazon Services LLC Associates Program, an affiliate advertising program designed to provide a means for sites to earn advertising fees by advertising and linking to Amazon.com. As an Amazon Associate we earn from qualifying purchases.

Amazon and the Amazon logo are trademarks of Amazon.com, Inc., or its affiliates. Additionally, OpticsAddict.com participates in various other affiliate programs, and we sometimes get a commission through purchases made through our links.

We do not specifically market to children under 13.